Ontario’s Progressive Conservative government has announced that it will cut the size of Toronto’s city council almost in half.

This odd decision (mid-election, it’s an expensive one) creates an opportunity to address an interesting quirk about Ontario’s right-of-centre party. Sometimes people will say something along the lines of, “LOL!! Progressive Conservative? Sounds like an oxymoron to me!”

A better understanding of early 20th-century politics, progressivism, and conservatism can show us why it’s not. It also helps us explore why the Ontario PCs might support smaller municipal councils and why doing so might be a mistake.

A little bit of history

The Progressive Reformer movement in the U.S. was founded in the common ground between conservatives and progressives. Conservatives want order, efficiency, and good government. Progressives want to direct (order) society by professionalizing and perfecting government (including improving efficiency).

Both groups agreed that by centralizing power in the hands of fewer politicians and especially in the executive (mayor, governor, or president’s) office, the cost of government could be lowered. They also believed that fewer politicians would make government more responsive and more responsible—they could “get things done”, and it’s easy to toss a small number of politicians who fail to solve problems they should have the power to tackle.

There was a parallel movement in the British tradition, social-imperialism. Progressives found common ground with conservatives who supported the supposedly enlightened, professional, and orderly Empire and aristocracy. And, of course, progressive conservatives in Canada. It was against these traditions and alliances that Canadian liberals like Wilfrid Laurier had to fight.

All democracy, all the time? No.

There are important ways in which liberal democrats are anti-democratic. The end of segregation in the U.S. and the change in government policy acknowledging women as persons qualified for Senate appointments in Canada are examples of unpopular changes to the law made by the anti-democratic court systems.

“Unexpectedly… started yelling loudly, right up in my face, and thumping my chest with his finger: “I don’t think she speaks English. So if you just look scared and sorry, I think this will end our time together here today!”

“The cop walked away. The woman gave me a decisive, scornful head snap, and marched back to her car. I went shopping, put the groceries in my backpack, and then went straight home to hide in my bathtub. Still, I was grateful to the policeman. He had done exactly the right kind of nothing. […]

“Now, the cop could have done other kinds of nothing. For example, he could have sat with his partner in the car, and just looked around when they heard the old lady screaming. They could have said, “Oh, old lady getting robbed. You want to get some doughnuts, bro?” Nobody thinks that’s the right of kind of nothing.”

Progressive conservatives might believe it’s important to centralize power to make it possible to get things done in the face of growing gridlock. But gridlock should be a sign that we have more work to do when it comes to persuading our fellow citizens to go along with our ideas for governance. Persuading people, not hammering through policies, is the right way to bring about change through government.

A little bit of history repeating

Progressive Conservative-mandated municipal amalgamation in the 1990s and 2000s sits comfortably in the progressive conservative tradition of the early 20th century. That policy failed to deliver on cost and efficiency. (Whether it improved responsibility of government is a more open question, one we’ll return to shortly.)

The Ford government’s plan to take an axe to Toronto’s city council in the midst of municipal elections in Ontario is also old-school progressive conservatism.

The idea behind cutting councillors is special interest groups like NIMBY groups in a councillor’s ward can make up such a large part of the voters that they can effectively control the councillor. Making the wards larger makes it harder for any particular group to be big enough to “capture” the counsellor and the counsellor can make decisions more freely.

Councillors will be elected more as executives entrusted to use their own judgement and less as representatives of the view of the people who represent them. It will be less democratic, but the council will be able to make changes more easily, and, fans of this strategy say, thereby better represent the people of the city.

The right kind of anti-democratic

The Ontario government has it in its power to decentralize governance not just to existing municipalities, but to allow and empower municipalities to organize at lower levels with even more representatives. Rather than needing all neighbourhoods or communities in a municipality to agree, this would free up each one to make the changes it believes are best.

This would surely result in a lot of bad decisions. But unlike in blanket decisions over large populations, the costs of those decisions would be borne by the smaller groups who made them. Smaller municipalities can compete more meaningfully than larger ones because it’s easier to “vote with your feet” and move between neighbourhoods and small communities. It’s much harder when you have to move out of Toronto to get away from Toronto’s policies.

Ontario could further improve the ability of people to experiment with better governance by creating an appeals board to play the role for municipal governments that the courts play for federal and provincial governments.

The Ontario Municipal Board once filled this role, in a way. Complaints that it was captured by developers were worth worrying about. How such a board is structured matters. Setting the “rules of the game” is a hard problem. But complaints that the board was undemocratic were less obviously a problem. That was the point.

Once the rules of the game are set, decisions made according to them have to be allowed with much less oversight from the provincial government. Ontario would need to worry a lot about what the rules ought to be, but it would need to stop worrying about whether municipalities make the “right” decisions in the eyes of the whole province.

It’s surely the case that municipalities in this framework would make a lot of wrong decisions. But it’s just as likely that expert executives will make mistakes! The point of good governance isn’t avoiding every mistake. Mistakes are inevitable. The point of good governance is that we learn from mistakes as we try to adapt to the ever-changing world.

The Ontario government isn’t setting itself up to allow for municipal experimentation, learning, and change. It’s setting Toronto up the way old school progressive conservatives would: by empowering politicians to shape the city with sweeping decisions. To directly impose upon the people what the government believes is best for them. 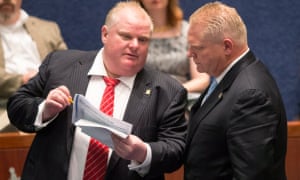 Who are “the people” and how do they make their needs known to their representatives?

Ironically, as the Toronto Star points out, Doug Ford’s brother provided maybe the best example of how strong local democracy answers that question. Rob Ford was a down-in-the-trenches populist democrat who prided himself in returning every single phone call and taking some action on every single constituent complaint he received. Regardless of their politics. Sometimes regardless of whether they were in his ward! You don’t have to be a fan of Rob Ford’s politics to understand that that’s what good representation looks like.

Rob Ford’s responsiveness to the people he represented was the reason he was so popular even among those who didn’t share his personal politics. He walked the walk on the positive side of populism. He made constituents feel like they were represented and that they mattered. He encouraged buy-in to and engagement with not far-away representatives, but local government. That is something that’s worth fighting for.

If they embraced more robust local democracy, Doug Ford’s government could empower smaller municipal bodies to make meaningful decisions with the input of more constituents rather making it easier for larger municipalities to push through big changes. In other words, Doug Ford could encourage the creation of lots of Rob Fords—in the best way possible.

Shrinking the council might make it easier for the Toronto City government to reach consensus and push through policies in spite of NIMBY groups and special interests. But to achieve this it will sacrifice representation and with it the importance of persuasion. That’s a dangerous game for the Ontario PCs to be playing in an era of creeping feelings of voter disenfranchisement.